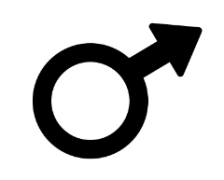 Mars is the planet most like Earth, although it’s smaller, has a very thin atmosphere and has lost the majority of its magnetic field. In Mars, a year lasts 687 Earth days, but the length of their day and the tilt of their axis are both almost the same as ours. Mars appears red because the rusting of iron minerals in the soil. In astrology, the red appearance of Mars contributed to the significations having to do with blood, anger, war, and soldiers. While these are still significations of Mars, we also tend to correlate Mars with our motivation, our drive, and our assertiveness. Mars can also be frustration, but it can help a lot if we channel this energy and take the constructive action that we know we want and need.

Mars represents our motivation, our drive and our assertiveness. Mars is about taking action and moving forward.

Mars is a Yang planet – masculine and active. Mars was considered Dry (and Hot) by the ancients. The quality of Dryness separates things. Mars is associated with the adrenal glands, the muscles, hemoglobin and the head.

Mars is a malefic in the Night sect.

Mars has Domicile rulership of Aries and Scorpio.

Aries is a sign of new beginnings and action where Mars is at home. Aries wants to set out on a new journey and go! This resonates well with Mars energy.

Scorpio is a sign of passionate investigation and motivation to keep digging until you find the truth. Mars is at home in Scorpio because Mars is also very driven.

Mars is in Detriment in Libra and Taurus.

Libra is a sign where Mars needs to consider the feelings of others before he takes action. This can feel uncomfortable to Mars, and Mars is far from home here.

Taurus is a vey slow sign. Taurus is Fixed Earth. Taurus is stability and comfort, but Mars wants to move and take action, so he is far from home here too.

Mars is in Fall in Cancer. Cancer is an insular sign that wants to pull everyone important in close and protect them from everyone else. Mars can be frustrated in Cancer. Mars wants to strike out on an adventure and move.

In a Night chart, Mars is the Triplicity ruler of Water signs. Mars also cooperates with both sect rulers of the Earth signs.

In Vibrational Astrology, Mars represents Action. When Mars is in a three planet pattern, it wants to act on the energy to make something constructive happen. If Mars is in a more internal vibration, this can translate to motivation or drive.