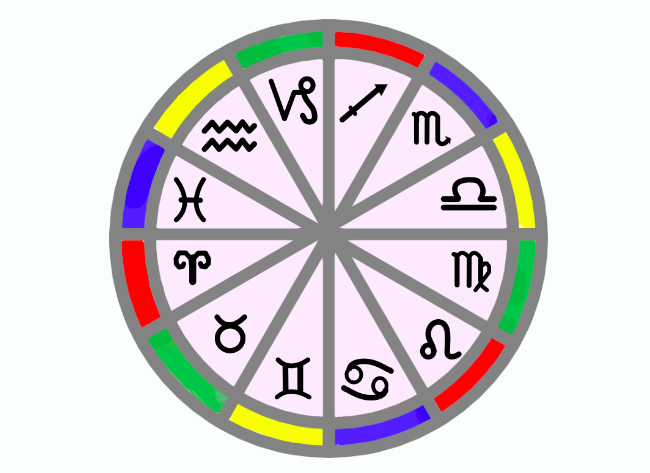 The signs of the zodiac are not an exact match with the constellations of stars in the sky.  The circular astrology chart is divided into 12 equal pieces. Each are 30 degrees of the circle.  These 12 pieces each correspond with a zodiac sign.

Some astrologers adjust the chart for the new position of the constellations. That is called a sidereal chart.

The actual constellations are not evenly spaced and all the same size. They vary in size. There are also other constellations that are near the ecliptic. The astrological chart is a representation. It is not intended to be a scale model of the heavens.

In astrology, the signs are categorized by polarity, triplicity and quadruplicity.

Examples of words used for the Polarity of a sign or a planet are Masculine/Feminine and Yang/Yin.

Polarity is also used to describe two signs that are across from each other. These opposite signs can give us insights as we try to find balance in our lives.

A masculine or yang sign or planet is active and oriented outward.

A feminine or yin sign or planet is receptive and oriented inward.

If you think of the path of the sun through the signs, and the solstices and equinoxes that anchor them, Quadruplicity is descriptive of where you are in that “season”. Quadruplicity is also referred to as the mode of operation.

Cardinal is the first sign after the solstice or equinox. Cardinal signs initiate activity. They set the goal and the agenda.

Fixed signs are in the middle between the two anchors. Fixed signs have inertia. They want to keep doing what they’re doing.

Earth signs are stable and grounded. They are solid and often related to our bodies and our senses.

Air signs are mentally stimulating and social. They represent the mind and the intellect and our communication with others.

Water signs are deep and sometimes unconscious. The represent our emotional responses and can be sensitive to the feelings of others.

Astronomy Lesson: Precession of the Equinoxes
YouTube video by David Cochrane: Why not Ophiuchus