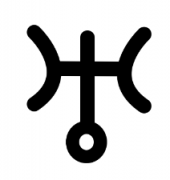 Uranus is seen as the unconventional planet. In astrology, Uranus is seen as the planet of the sudden and the unexpected. It is interpreted as a hot, impulsive energy. Uranus’ physical qualities do not match any of that except the unconventional part. Uranus rotates in the opposite direction from other planets (except for Venus), and is also very unique because its rotation is relative to a horizontal axis instead of a vertical one. Because of this, one revolution around the sun (year) for Uranus has three seasons lasting 21 years, 42 years and 21 years.

Uranus was discovered in 1781, around the same time as the French Revolution and the American Revolution. It was also the time that electricity was popularized. Uranus is associated with rebellions and impulsive change. Uranus is also associated with technology and other developments that can have a disruptive impact.

Uranus was assigned Domicile rulership of Aquarius, replacing Saturn for astrologers that use modern rulerships. Uranus has added a more eccentric and rebellious flavor to Aquarius.

In Vibrational Astrology, Uranus wants to be in the moment. Uranus is about now and does not care about the past or the future. Uranus is free and impulsive. Uranus also represents cycles because it can tune into the moment of each cycle as it happens. When Uranus is part of a three planet pattern, it can bring impulsiveness and a need to act freely.