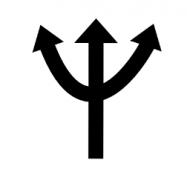 Neptune is considered to be a dreamy planet causing either confusion or mysticism. In contrast, the planet Neptune is an ice giant with unpredictable storms and strong winds that travel with frozen methane clouds across the planet. These winds can reach 1200 mph (2000 km/hr).

Neptune was assigned Domicile rulership of Pisces, replacing Jupiter for astrologers that use modern rulerships. Neptune has added a more nebulous flavor to Pisces.

In Vibrational Astrology, Neptune is what makes life magical for you. It’s the excitement and enthusiasm of a child. Neptune is about your dreams – whether those dreams are spiritual or not. When Neptune is part of a three planet pattern, it adds a sense of idealism and a feeling that things can be larger than life.