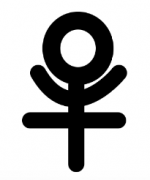 Pluto is a small dwarf planet that orbits along with a moon that is almost the same size called Charon.  They act as a double planet. Pluto also has a glacier on its surface that looks like a heart. People used to think Pluto was just an icy rock, but now some scientists theorize there is a warm ocean beneath its icy exterior.  Pluto signifies deep emotions, obsessions and transformation.

Pluto was assigned Domicile rulership of Scorpio, replacing Mars for astrologers that use modern rulerships. Scorpio was already a sign of depth and intensity.

In Vibrational Astrology, the energy of Pluto is obsessive. When Pluto is part of a three planet pattern, the energy can become compulsive and intense. This is an eruption of compulsion and intense focus, but it comes and goes. It would be too much if it was constant.