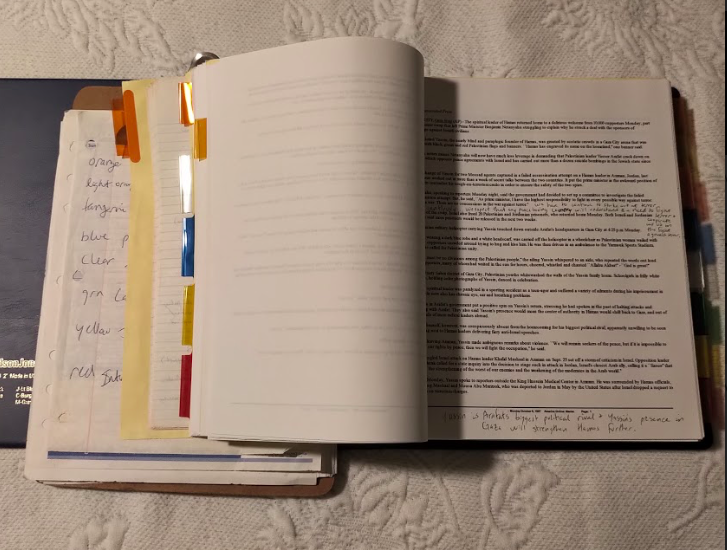 I’m frequently overtaken by obsessions. I get interested in something and just devour everything I can find.

The first one I remember was back in 1996 or 1997 when I found out how easy it was to search the news for keywords with AOL.  I was obsessed with Israel.  The religious claims, the Christian end times ideas, the political situation, the history – how the conflicts came to be.  I was obsessed.  I was reading books, I was searching the news, and I was printing everything out.  Soon I had an overwhelming amount of printed pages of these news stories.

I bought some binders and decided to keep and categorize them, but that was even more overwhelming because I kept adding to my pile.  I still have the binders I managed to fill but there were many more pages waiting for me.  I just couldn’t keep up.  Also, my passion cooled and I looked on it as a daunting task that I seemed to be avoiding.  I wanted to, but I also didn’t.  In the end, I mournfully recycled those uncategorized stories when I needed to move to a new house.

Along with Israel (or maybe right after it?) was comparative religion.  Mythologies, the religions and scriptures I didn’t grow up with, theories on the life of Jesus as a person, church history and doctrinal fights…  I’m still not really solid on where I come down on interpreting all of this, but I do find it fascinating.  Why are we all so driven to find deeper meaning? A higher structure? An explanation of all that is?   I’m still deeply attracted to this topic.

Politics was a depressing and frustrating obsession.  I could (and frequently did) explain why Kerry “voted for it before he voted against it”, but he didn’t bother to explain even when asked directly in a debate.  I was yelling at the TV. I read later that the Democrats had strategically decided they didn’t want to get into the “sausage making” process, and maybe they were right when it comes to “messaging” but I found it all very frustrating.  I was writing for a political blog back then and I was paying attention to everything.  Especially the law making process.  The Democrats had to vote to ban sports gambling so they could pass the port security bill?  Really?!?

But don’t worry, this won’t be a political blog.  I just can’t.

The economic crash made me obsessed with our global economic system.  The role of the US dollar and how it impacts the currencies of other countries,  the role of leverage, the amount of allowable leverage, derivatives, details about accounting standards and how they’re used or abused, liquidity, cash equivalents.  I understand a little better, but clearly not good enough because I’ve been pessimistic about the stock market for years.  The economy and stock market levels keep humming along as I try to find something I can buy for a price I’m willing to pay.  So, I mainly sit on the sidelines, but I wish it well.

Maybe this frustration is why my next and current obsession is Astrology.  If I can just figure it out, maybe it’ll be a tool to help me navigate all these confusing cycles!  I didn’t go into it with such a conscious intention though.  In a forum for one of my stocks back in 2006 or so, someone mentioned the site of a financial astrologer.  The commenter said he “didn’t really believe in it, but it was sometimes surprisingly accurate”. So I checked it out and I found that I really enjoyed those weekly updates.  The correlations and predictions were so interesting and they really correlated with what was going on back then.  I even still read those columns, but it’s not the same.  I don’t know if it’s because the signatures aren’t strong enough to be so fascinating or if the author is less inspired or if it’s because I’ve moved on, but I suspect the latter because I’ve been obsessing about the broader world of astrology since 2015.

In 2015, I attended an astrology conference and that was it!  I was hooked!  So many different approaches, so many variables and techniques, so many different parts of reality to try to analyze.  I love it.  I’m trying to absorb it all.  I barely look at the cycles of the world at all right now though.  I’m trying to use astrology to figure out myself. Which techniques tell me something true about myself? Which ones just don’t match? Why don’t they? Am I missing some variable to interpret it? Is it just a description of me or a way to view things in retrospect or can I put it to use for something practical?

In this time, I’ve been collecting a lot of information and in a repeat of the overwhelming bag of uncategorized news stories of so long ago, I feel a need to organize it.

I will probably keep collecting and obsessing but I want to also start organizing, interpreting and synthesizing.

And I’m excited by the chance to share it!

I’m hoping for a collaborative community that can all keep learning together and never stop and never think we already know all there is to know.  The website just isn’t to the point where I can turn on comments yet or rollout some other features I have in mind.

Please bear with me – hopefully the site will be ready soon!

Thank you for being here!